There are a number of diseases that can creep into our garden turf. Here we have compiled a short list to help you identify any prominent turf diseases:

Brown Patch As the name suggests brown patch appears in circular patches in a brownish yellow colour and can range from as little as six inches to several feet in diameter. In particular it effects all cool season grasses specifically ryegrass and tall fescue. Brown patch is most likely to occur during extended periods of heat and humidity as well as when their is significant lack of of air movement within the soil and turf systems. The best way to control brown patch is to ensure that you use proper watering practices as well as aerating and detaching to provide adequate air movement throughout the lawn area.

Powdrey Mildew Powdrey Mildew is a fungal disease common to many plants with each of it’s own disease. Cool season grasses are most effected by Powdrey Mildew appears can appear quickly on garden turf and is prominent in shady areas and occurs more frequently during cloudy or overcast periods. It is identifiable by a white dust appearance on the leaf blades. Turf that has Powdrey Mildew can yellow and die over a prolonged period but generally turf is able survive with Powdrey Mildew. To control Powdrey Mildew it is best to reduce the amount of shade. Prune or trim back any overhanging branches to allow for increased sunlight and air circulation. 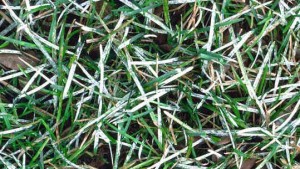 Red Thread If you come across a presence of red webbing or thread your lawn turf is most likely to have the disease known as red thread. The main cause of red tread is low levels of nitrogen in the soil. Although it is a relatively harmless disease it can be used as an indicator that it is time to fertilise your turf. Fescue grasses and ryegrass are susceptible. Red thread can be treated using chemical fungicides but the best practice is to fertilise with adequate nitrogen, maintain a pH level of 6.5-7.0 and water deeply in the early morning. 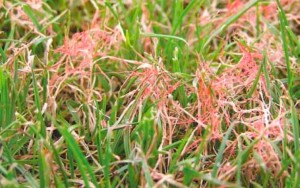 Snow Mold Snow Mold is a funghal disease that is prominent after following a period of snow and appears as snow begins to melt.  There are two types of Snow Mold; Grey Snow Mold and Pink Snow Mold. Pink Snow Mold infects the crown of the plant and can be more detrimental to garden turf than Grey Snow Mold which effects the leaf tissue. Generally Snow Mold occurs when there is an extended period of snow cover on the ground that is not completely frozen, whilst it can also occur under leaves that have not been cleaned up before a season of cold weather. You can use specially designed fungicides but these aren’t recommended as Snow Mold damage can recover in time. 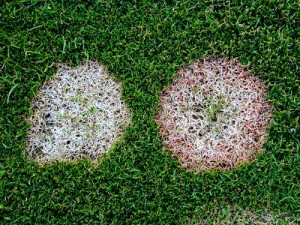 Fairy Ring Fairy Rings are arcs of mushrooms in grassed areas or forests. They aren’t particularly detrimental to turf but can be very difficult to get rid of. Fungicides have been created but have resulted in limited success. Digging out the mushrooms also has it’s limits as the spores of the mushrooms run wide and deep and require you to dig out a depth and width of four feet. 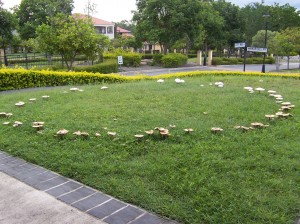 This entry was posted in Turf Care. Bookmark the permalink.